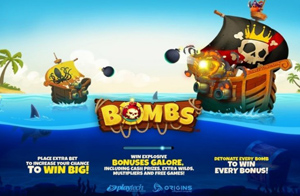 Iconic online casino software group, Playtech, has dropped a bomb on partner online casinos, with the release of its new pirate-themed slot game. The Bombs is a 5 reel 20 pay line slot that takes players on a fun pirate adventure.

The game is slightly different to what South African players have grown accustomed to expect from Playtech, with some exciting new features and structures. The Bombs slot boasts seven rows of symbols on each reel. In addition, you will find a pirates wheel menu bar to the right of the reels – something that isn’t found in any other Playtech title. It is clear that the group is experimenting with a more avant-garde look and the results are great!

Wager anything from 0.20 to 200 a game, for betting limits that suit all players.

Playtech, however, has added something extra – the Extra Ship feature which essentially operates as a ‘buy-a-bonus’ scheme. With this feature, bets can reach up to 500 per spin! In the game, pirate ships are positioned above the reels. These ships have the ability to fire bombs onto the reels, which can explode and destroy symbols. The results? Even more rewards for players. If you take out the Extra Ship feature, more bombs are positioned on the ships.

The ships also have the ability to fire Bonus Bombs onto the reels and with them come more rewards. Look out for random cash prizes of up to 10 x a bet, random multipliers of up to 10 x, random wild bombs which can drop 10 wilds onto the screen, a mystery bomb which rewards any of these, as well as a Free Spins bomb bonus.

The Boombastic Free Games feature rewards you with 10 free spins and lots of ways to win more.

The highest jackpot in this game is the chance to win up to 4,000 times your stake on each spin or free spin.

There is no doubt that Playtech has come out on top with its brand new, explosive new The Bombs video slot game. The title is fun, unconventional and a great new game from one of the greatest software providers of all.

This entry was posted by on Monday, 01 April 2019 13:00 in blog Blog subscribe
Leave a reply
You are not allowed to leave a reply!