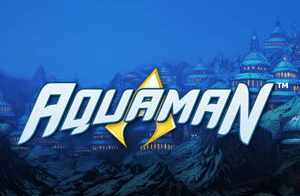 With the hype of the recent festive season, you may be forgiven if the announcement of Playtech new slot game, Aquaman, slipped off your radar. But never fear – we’re here to introduce you to one of the finest slot games to come out of the Playtech’s games studios.

Aquaman slot was timed to go live at around the same time as the much-anticipated DC Comics blockbuster of the same name. If you had the privilege of watching the movie in recent weeks, you will know that we’re talking about a mega-success on the big screen, which is on track to break records in the United States and worldwide.

With the movie being such a hit, you wouldn’t expect anything less from a slot game based on this popular DC Comics character. You won’t be disappointed. Aquaman slot has everything you’re looking for in a slot game – a great theme, big jackpots and lots of action through bonus features.

Aquaman slot is set against underwater scenes, in the mystical kingdom of Atlantis. Characters on the reels include Aquaman himself and three other villains. You’ll find superb graphics on this 5-reel, 243 ways to win game, which is playable on all devices, including mobile.

The highest paying symbol is our protagonist, which pays out 20 x your stake when five of them land across a pay line.

Respins: When Aquaman lands fully stacked on the second reel, you will trigger the Trident Wild Respins feature. You’ll see Aquaman throw his trident into the spinning reels, turning three adjacent symbols into locked wild symbols. The reels will then respin until you land a winning combination.

When you land the Mera symbol on the third reel, you will trigger the Ocean Rush Respins feature. A random symbol is chosen to be locked and if you are lucky enough to land the same symbol, it will also be locked.

Free Spins: Land three or more scatter symbols on the reels to win up to 16 free spins. During this feature, collect Golden Aquaman symbols which will turn villains into Aquaman and boost your rewards. These free spins are also retriggerable.

This entry was posted by on Monday, 07 January 2019 09:20 in blog Blog subscribe
Leave a reply
You are not allowed to leave a reply!