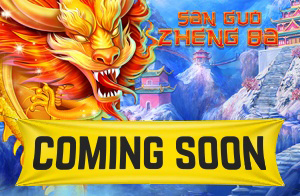 When it comes to Asian-inspired online casino games, the software group, Realtime Gaming definitely takes the prize for innovation, rewards and entertainment. This time around, the group has rolled out the brand new San Guo Zheng Ba video slot at partner casinos such as the South African friendly Springbok Casino. The game takes players deep into the rich pattern of Chinese history when emperors ruled supreme.

The interactive San Guo Zheng Ba video slot invites players to vie for supremacy as the emperor’s powers fade, with a promise of riches and the control of a marvelous dynasty. The further that players progress in this game, the more chances they have of being rewarded, and there are endless winning features to help them reel in those riches.

“In ancient China, few people dare challenge the powers of the emperors who ruled supreme,” said the manager of Springbok Casino, Daniel van Wyk. “But this new game makes vying for control of the dynasty and claiming the immense riches that go with it a real possibility for our players.”

“Not all will succeed, but skillful players will battle and win for the biggest treasure of them all – the rule of China!”

The new game will go live at Springbok Casino on May 23rd and will be available on download, instant play and mobile platforms.

• Multiple winning features including free spins, expanding wilds and Super Spins.
• When three or more Scattered Emperor symbols appear on the reels, the San Guo Zheng Ba feature is triggered and five free games are delivered.
• Two scatter symbols pay out during free spins, and any wins that include the Golden Dragon Wild are doubled.
• The free spins feature can be retriggered up to five times.
• At the end of the five free games, the Super Spins feature is activated, with rewards increased depending on the number of scatter pays that were seen during the free spins round.

This entry was posted by on Monday, 07 May 2018 11:10 in blog Blog subscribe
Leave a reply
You are not allowed to leave a reply!