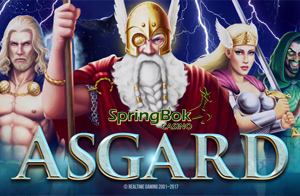 A popular theme for slot games is that of ancient mythology. The latest software operator to jump on this bandwagon is Real Time Gaming (RTG), which announced the upcoming release of its new slot game, Asgard. The video slot game, set to go live at RTG powered online casinos later this month, is based on Norse mythology.

All the popular characters from Norse mythology appear in the game, especially the god Thor, as well as Odin and Loki. The game is reminiscent of the latest Thor movie, Thor: Raganork, and fans of this genre of film will definitely be happy spinning the reels of the new RTG game.

“It’s never too late to get into Norse mythology, and the gods are waiting to power our players on to massive wins in our latest Real Time Gaming slot release, Asgard,” said Springbok Casino Manager, Daniel Van Wyke. “This bold and thunderous game immerses players into the world of the gods, allowing them to engage with characters such as Thor who they will recognise from the Marvel movie franchise as they seek out big wins.”

About Asgard Slot by RTG

The new video slot game by RTG is a 5 x 3 reel, all ways pay slot which allows players to head off into one of nine worlds well known Norse mythology.

Some of the features of this game include:

This entry was posted by on Thursday, 07 December 2017 07:51 in blog Blog subscribe
Leave a reply
You are not allowed to leave a reply!