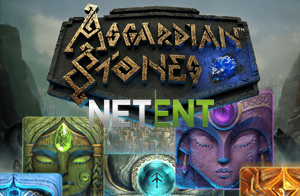 The online casino software group, NetEnt, which provides games to many top rated South African casinos, is getting ready to roll out a new game to partner sites in February 2018. The new Norse-themed Asgardian Stones slot is scheduled to be released on February 22nd, and players are already counting the days until they find this game at their favorite online casinos.

Asgardian Stones slot will feature all the well-known characters in Norse mythology, including Loki, Thor and Odin, while Asgard is one of the Nine Realms in Norse legends. The game, which can be previewed on Youtube, boasts flawless animations and rich Norse symbols, thanks to the very talented creative team at NetEnt.The game is set against the shiny city of the gods, while a dramatic soundtrack of stones falling leads to the exciting environment of Asgardian Stones slot.

Asgardian Stones slot will come with five reels, 3 rows and 20 fixed pay lines and some truly amazing bonus features. The game seems to carry all the elements to make it another supreme NetEnt release and could become a serious contender to the software group’s most popular title, Gonzo’s Quest.

Some of the special and bonus features include:

• NetEnt’s trademark Avalanche game mechanism, where avalanche after avalanche falls onto the reels until you reach the shiny city of the gods. The symbols fall into position on the reel and when a winning combination is formed, an Avalanche begins. Winning symbols explode and disappear, with another Avalanche of symbols falling and a chance to win big over and over on every spin.
• Wild substitutions.
• 2 x 2 and 3 x 3 Colossal symbols
• A random Colossal Crush feature where Colossal Symbols crush rows of symbols, with each row increasing the multiplier by 1 – 4 times.
• Bonus wheel – When the Bonus Wheel 3 x 3 symbol lands on the reels 3, 4 or 5, the Bonus Wheel spins and then stops to reveal up to 5 x your stake cash prizes and/or free spins.
• Up to 25 Free spins. During this feature, the wild can also become a Colossal Wild symbol.
• The chance to win up to 2,000 times your bet.

This entry was posted by on Monday, 22 January 2018 08:52 in blog Blog subscribe
Leave a reply
You are not allowed to leave a reply!