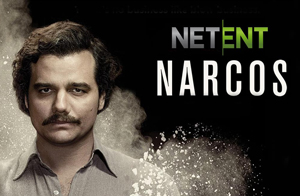 In early November, the fourth season of Netflix TV series, Narcos, is set to be released. There is much anticipation ahead of the new season of the American crime drama that is set in Columbia and is based on the story of Pablo Escobar, the drug kingpin.

How does this tie in with online gambling? Because last year, the online casino software group, NetEnt, announced that it had signed a license agreement with Gaumont Studios to launch a slot game based on Narcos.

Originally, there was speculation that Narcos would be launched after the expected release date of the much awaited Vikings slot (which is due to go live on November 22nd this year). However, now that a release date for the fourth season of Narcos has been confirmed by Netflix (November 6th), NetEnt will probably do its utmost to release Narcos first in order to coincide with the TV series.

“NetEnt is a world leading provider of premier online gaming solutions, and we them to develop and create a gaming property that will thrill the millions of Narcos fans around the world and provide a new way for them to experience and engage with the brand,” noted the head of legal and business affairs at Gaumont.

Narcos is filmed in Columbia and traces the rise and fall of Pablo Escabar. Season Three picked up after the drug lord’s fall and follows the Drug Enforcement Administration’s agents as they go after the infamous Cali Cartel. Season Four has been branded as a ‘reset’ and will be set in Mexico in the ‘80s.

This entry was posted by on Monday, 01 October 2018 10:32 in blog Blog subscribe
Leave a reply
You are not allowed to leave a reply!