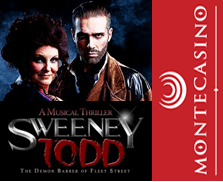 From mid-October at Montecasino, Stephen Sondheim fans can expect to be entertained with the hit thriller musical, Sweeney Todd, the Demon Barber of Fleet Street. Featuring a cast made up entirely of South African actors, critics predict that this will be one of the most packed shows any South African casino has seen to date. Opening on 10 October, the show will run for six weeks at Montecasino’s Pieter Toerien theatre and tickets have already gone on sale.

Sweeney Todd is well known globally as one of the most gruesome musicals ever created, and though it was originally written and performed in 1979, this gory yet song-filled classic is no less disturbing today than it was almost 40 years ago. The character of Sweeney Todd, which has also been portrayed on the big screen by Johnny Depp in the Tim Burton adaptation, tells the story of a man named Benjamin Barker who, after spending 15 years in exile after being charged falsely, returns to his home in Fleet Street to exact his revenge on those who caused his story of sorrow. As the tale is a little gory, it may not be suitable for younger children.

The show has been performed on Broadway and London’s West End a myriad of times, and has won both the Olivier Award and Tony Award. Now, it is being brought to SA by the KickstArt team, who will direct and design such famous SA names as Michael Richard, Candice van Litsenborgh, Cameron Botha and Earl Gregory, who is a theatre legend and has spent years overseas touring as a part of the cast of Andrew Lloyd Webber’s, Cats!

The score of the musical is recognised globally as one of the finest ever written, and given that Sondheim is one of the most prestigious songwriters of all time, this should come as no surprise to fans, who can expect to see the cast perform hits such as “Johanna”, “By the Sea” and “The Ballad of Sweeney Todd” during the South African casino production.

Tickets are currently on sale and should you wish to buy them, you can visit computicket or visit the theatre’s box office. Tickets can be purchased for as little as R100, or for those with a much more finessed sense for the theatre, R350 tickets will get you prime seats. The performances of the show will run from Wednesday to Friday at 20:00, though those with more free time on a weekend can catch the matinees on Saturdays at 16:00 or on Sundays at 15:00. Tickets are likely to be sold out quite quickly, so if you love the theatre, ensure you don’t miss out on what promises to be an unforgettable theatre treat.

This entry was posted by on Monday, 28 September 2015 00:00 in blog Blog subscribe
Leave a reply
You are not allowed to leave a reply!