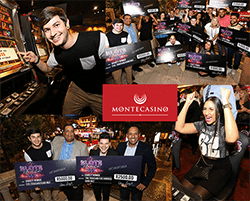 The weekly Montecasino Slots Chase celeb tournaments have come to a close. Having played for the opportunity to donate to the charities of their choice, several celebrities participated one last time to battle it out with each other and donate their winnings to a worthy charity of their choosing.

The celebrity edition took place alongside the official Slots Chase tournament, which will culminate in a grand final on 30 April at Silverstar Casino.

Each of the participating twelve celebs were automatically awarded R1000 each to donate to their charity, with the top scorer of all the three tournaments winning R2 500. The leader board was then cleared and the twelve finalists went head-to-head for the big charity prize of R5 000. El Broide emerged as the victor and donated his R6 000 to his chosen charity, PETS (Pet Empowerment in Townships).

Coming in a close second, Lee-Roy Wright won a total of R3 500 (R2 500 top scorer prize in addition to the R1 000 each participant was awarded) to donate to his charity, Kitty & Puppy Haven.

To get in on the real Slots Factor tournament, simply buy-in for R100 at Montecasino, any time until 24 April. Packaged buy-ins are also available. The participants obtaining the top 10 highest scores from a single heat at each of the three participating properties – Montecasino, Gold Reef City and Silverstar – over the six-week period will automatically win the unit prizes and, more importantly, qualify directly for the finals at Silverstar Casino on 30 April.

This entry was posted by on Friday, 22 April 2016 00:00 in blog Blog subscribe
Leave a reply
You are not allowed to leave a reply!