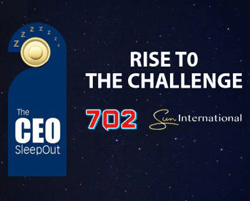 Sun International, the corporate body which owns casinos and resorts throughout Southern Africa and around the world, has declared its latest social awareness initiative a huge success. More than 240 business and industry leaders took part in the fundraiser sponsored by 702 Radio and Sun International, to bring attention to the plight of homeless people in the country and to raise funds for Girls and Boys Towns.

Each CEO who took part in the initiative pledged to sleep out on the streets of Johannesburg in freezing temperatures on June 18th, as well as pledged R100,000 to the cause. A total of R23 million was raised for the cause.

"It has been amazing to see the enthusiasm with which our top, most highly respected business leaders have embraced this challenge," noted the chief executive officer of Sun International, Graeme Stephens. "The SleepOut looks set to be one of the largest gatherings of South Africa's captains of industry ever."

"There has been an incredible response to the initiative and we're really grateful to all those who have so readily agreed to give up a night to sleep on the streets and show their understanding of a major social problem in South Africa."

Stephens said that many CEO's have gone well beyond what was requested from them and did their own fundraising among their networks.

"I think they deserve a special word of thanks," he said.

While the millions raised by the 702 Sun International CEO Sleepout were undoubtedly welcomed by the charities they supported, the fact that so much awareness about homelessness has been raised is much more important.

Stephens said that the initiative's media partner, 702 did "an amazing job to raise awareness of the event and its cause." He added that together with the CEOs and the executives taking part, Sun International was dedicated to help increase awareness of the plight of those on the streets "and inspire other CEO's across businesses and industries in South Africa to step up and work together to help eradicate homelessness in our country."

This entry was posted by on Monday, 22 June 2015 00:00 in blog Blog subscribe
Leave a reply
You are not allowed to leave a reply!