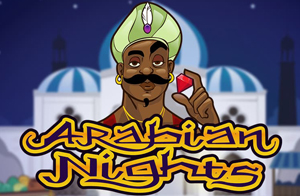 The Swedish online casino software group, NetEnt, announced that a stunned player bagged himself a jackpot worth over R14.5 million on one of the most popular progressive slot games in the South African online casino industry.

The lucky player, who hails from Sweden, played Arabian Nights progressive jackpot video slot at a NetEnt powered online casino, before landing the literally life-changing jackpot of €1.4 million. What is truly amazing is that the player wagered just €10 (R146) on a single bet before hitting the jackpot.

Arabian Nights is an attractive game at NetEnt casinos, and in fact was the first jackpot slot released by the group in 2005. Since then, it has continued to entertain and reward players, creating instant millionaires. Over the years, NetEnt has added many more slots to its jackpot network, including its highest-paying bestseller, Mega Fortune slot.

The latest jackpot winner was the anonymous Swedish player, who had Christmas come early with his staggering R14.5 million prize.

The Director of Games at NetEnt, Bryan Upton said about the Arabian Nights jackpot payout:
“Arabian Nights is such as legendary game in the jackpot segment. It has created instant millionaires continuously since its release in 2005. We are thrilled the game yet again has delivered a life-changing win and would like to extend our congratulations to the player.”

Arabian Nights is a 5 reel, 3-row and 10 fixed line video. As can be derived from the title, it has a fun Arabian-theme and plenty of bonus features to make it one of the most spectacular games in NetEnt’s portfolio.

Some of the highlights of Arabian Nights slot include:
• Wild turbaned Sultan symbol holding a sparkling jewel.
• Three scatter symbols trigger the Free Spins bonus feature, which rewards with 15 free spins that can be retriggered. All wins are tripled thanks to the 3 x multiplier.
• When all five Prince symbols land on the payline and the player makes the maximum wager, the progressive jackpot is won.
• A standard fixed jackpot of up to 10,000 coins is also up for grabs.

This entry was posted by on Monday, 16 December 2019 08:35 in blog Blog subscribe
Leave a reply
You are not allowed to leave a reply!