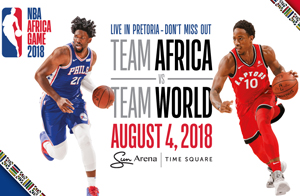 Video on Demand (VoD) service Kwese Iflix has announced that the 2018 NBA Africa Game will be available for free to basketball fans across the continent via its mobile app. Kwese Free Sport will offer live virtual front-row seats to the game which takes place atthe Sun Arena in Time Square, Pretoria on 04 August. Several of the NBA’s basketball players have made their way to Pretoria as they get ready to compete in Team Africa vs. Team World game.

The NBA had also sponsored two sold-out African Games during 2015 and 2017 but they were held in Johannesburg. The funds from these exhibition games were used to support various charities including Nelson Mandela Foundation, UNICEF, SOS Children’s Villages South Africa (SOSCVSA), and Boys and Girls Clubs of South Africa.

This will be the NBA’s third game on the continent. The exhibition game will be played to support the Nelson Mandela Foundation to honor the 100th anniversary of the birth of former South Africa President and anti-apartheid political leader Nelson Mandela.

NBA Africa Game 2018 can be watched in sub-Saharan Africa via Kwese Sports 1, Kwese Free Sports, Kwese TV app, and Kwese’s partner free-to-air and pay-TV channels. Over 80 NBA athletes currently or formerly playing in the pro league are either from Africa or have family ties there. They include Naismith Memorial’s Hall of Famers Dikembe Mutombo (DR Congo) and Hakeem Olajuwon (Nigeria).

This entry was posted by on Friday, 03 August 2018 11:36 in blog Blog subscribe
Leave a reply
You are not allowed to leave a reply!