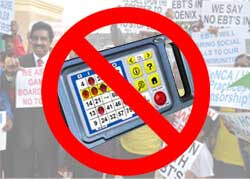 Locals from KwaZula-Natal have upped the ante in their fight against the installation of electronic bingo machines in shopping malls around the province. Many residents took to showing their displeasure of the government's decision to consider bingo halls in shopping centers by demonstrating with posters and other means, it was reported in the local media.

Residents have been especially vocal at public hearings that are being hosted by the KwaZulu-Natal Gambling Board in recent weeks, as well as having their opinions heard during the hearings themselves.

Some of the public have shared experiences of friends who faced financial ruin by playing at electronic bingo machines, as well as other horror stories. Many others involved in local communities, such as religious and political bodies have made their objections known.

Speaking in favor of the move to introduce bingo terminals was the premier of the province, Senzo Mchuni, who said that existing gambling legislation could be amended to make sure that these terminals are kept in places that are not in reach of children or disadvantaged communities.

Residents have also established the People's Forum Against Electronic Bingo, made up of over 20 different civic, community, educational and political groups – representing more than 3 million people – in a bid to object the proposals.

But while it is important for civic groups be vigilant against problem gambling, it doesn't seem to be as big a problem as residents believe. The Executive director of the national Responsible Gambling Program, Mana Magmolo said that while it was true that when people have access to a gambling facility, more people will be drawn to gambling, the truth was that "most people understand that gambling is a form of entertainment." Magomolo said that there is only "a small percentage of people who don't understand that it is a form of entertainment" and those are the ones who usually "get into trouble".

This entry was posted by on Thursday, 25 September 2014 00:00 in blog Blog subscribe
Leave a reply
You are not allowed to leave a reply!