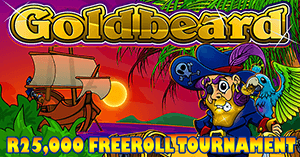 Throughout the first half of May you can take part in the freeroll tournament offering the R25,000 or €1,000 prize pool at Silver Sands Casino. The tournament is being run on GoldBeard slot and whether you are a new or already registered player you can compete for 10 minutes with other gamers and use 10,000 chips to climb up the leader board.

In order to be as successful as possible, you have to know the game rules. As we have said, the tournament is being run on GoldBeard, a five-reel progressive slot played at 20 adjustable lines. The game from RTG is inspired by GoldBeard pirate and offers Wild, Scatter, multipliers and free spins. You can win the 5,000 jackpot or the progressive jackpot awarded randomly at the conclusion of any game. You have to place at least two matching symbols in a row on an active payline including GoldBeard's ship, a parrot, a cannon and a treasure chest standing for high value symbols while other positions are populated with playing card symbols from nines to aces.

Wild is represented by Goldbeard and it acts as a joker and a multiplier at the same time, increasing all your winnings by 2. The top jackpot is delivered for having four ships and GoldBeard Wild on an active payline. Besides, when two Wilds appear simultaneously on the reels 1 and 5 they activate the bonus game delivering up to 20 free spins. During the free spins feature all payouts are tripled. Scatter depicted as a golden coin pays at any position awarding 1x, 2x, 20x and 100x total bet per 2, 3, 4 or 5 of a kind respectively.

This entry was posted by on Wednesday, 04 May 2016 00:00 in blog Blog subscribe
Leave a reply
You are not allowed to leave a reply!