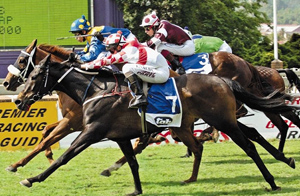 In January this year, the province’s executive council published proposed changes to the gambling law, including one that could deprive Phumelela of the 3% tax gain that it derives from gamblers’ winnings. The tax amount will be directed, instead, to the Gauteng Gambling Board.

According to Phumelela, the government has “elected to amend Regulation 276, which will have the effect of depriving Phumelela of its portion of the betting tax and directing it towards the Board.” The group said that the amendment would have “a material adverse effect on Phumelela and on racing in general.”

The betting tax received by the group in Gauteng makes up 90% of its betting tax in South Africa – to the tune of R75 million a year.

The amended regulations will be published this weekend.

The chief executive of Phumelela, John Stuart, said that it has been challenging six months for the group, and all executives have been tasked with cost reduction targets. He said that this would “specifically aid to counteracting our current reduced level of profitability and limited balance sheet flexibility.”

Stuart warned that the proposed amendment would hit the group hard.

He pointed out that payment of the tax was agreed to between the Gauteng government when the racing industry was corporatized in the 1990s with the intention to ensure the sustainability of the industry.

John Stuart also said that Phumelela remains “open to any realistic and constructive ideas that may benefit the horse racing industry and the shareholders of Phumelela.”

It was reported that that December 2018 was a particularly poor month for the global racing industry, including South Africa.

This entry was posted by on Monday, 08 April 2019 10:46 in blog Blog subscribe
Leave a reply
You are not allowed to leave a reply!