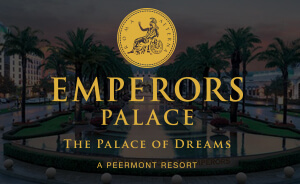 Emperor's Palace Casino, a Gauteng based property owned by the Peermony Group, rolled out its brand new Convention Center to complement its existing conference and meeting facilities recently. The group unveiled the R30 million investment feature which covers 1800 square meters and many new additions.

"A contemporary spin on the original interior, the Convention Center has created an inspired canvas for the meeting and conference industry, solidifying the facility's five star status and world class standards which guests have come to know and expect," said the group in a press release put out recently.

The new convention center has around 30 venues, each one inspired by Roman mythology. As such, visitors will find themselves in rooms named Tiberius, Claudious and Lucretia, with interior features to match the theme. Venues are created to suit all types of visitors, from huge vaulted rooms to intimate school room shaped rooms. The Center Court can be used for what Emperor's Palace terms 'cinema-style' conferences or big banquets.

As a nod to South Africa's rich heritage, the casino has set up the CODESA walkway which marks the time that the country's political parties gathered in 1991 to commence negotiations about South Africa's future.

"The CODESA walkway was developed in commemoration of the negotiations that took place," said the General Manger for Emperors Palace, Nigel Atherton. "The walkway highlights the negotiations and depicts historical events occurring at the time with displays augmented by copies of newspapers, press articles and interviews from the late 1980s and early 1990s."

Emperor's Palace Casino and Hotel is conveniently located alongside the OR Tambo International Airport and is considered a world class destination for visitors and locals alike.

Many flock to the resort due to its unparalleled gaming features which includes cashless gaming for the ultimate in convenience. The games at Emperor's Palace Casino include over 1700 slot machines and close to 70 table games such as blackjack and roulette. The casino also boasts the widest range of denominations on slot games – from 1c to R100. Minimum bets on roulette are R2.50, R10 on blackjack, R50 on poker and R5 on Mini Punto Banco.

Emperor's Palace is currently rounding up the World Poker Tour Poker Classic event, which had buy ins from only R600. The tournament included a Celebrity Poker event, with all proceeds going to the charitable organization Feed SA.

This entry was posted by on Monday, 17 November 2014 00:00 in blog Blog subscribe
Leave a reply
You are not allowed to leave a reply!