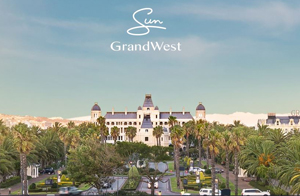 Grand West Casino, Cape Town’s leading entertainment hub, is showing its commitment to social responsibility by getting its hands dirty! The casino recently teamed up with several groups and school pupils to help the environment in a new initiative – cleaning up part of the Elsies River canal in the Mother City.

Grand West Casino volunteers, along with the pupils, removed litter and invasive species from the part of the Elsies River that flows part the casino.

The cleanup took place one day after World Water Day as a nod to this important environment event.

The general manager of Grand West Casino, Merwyn Naidoo spoke about the gesture and noted: “We want to clean the water source going past the Grand West. We want to do this on an ongoing basis because we see the river being clogged continuously by plastic. Last year, we picked up 50 plastic bags of rubbish.”

It has been a busy month for Grand West Casino, with several headline events that drew the crowds and allowed visitors to appreciate all that this casino and entertainment destination has to offer.

At the beginning of March, the second annual Cape Town Motor Show was held at the casino, with organizers putting together a highly professional and comprehensive motor show that included a 4 x 4 interactive track. The event also showcased some of the latest car models, as well as brand new motorcycles represented by Kawasaki, Suzuki and Triumph, to mention just a few.

The Sun Hall housed classic exhibitors, and most people agreed that the racing and sports models – most of them open models, attracted the most attention.

Grand West Casino, together with main sponsors BP and Orliflex, also made sure that there was a healthy dose of charitable spirit at the event, with five large trucks transporting a total of 100,000 liters of water to the drought-stricken Cape. Locations such as old age homes and animal shelters were the main beneficiaries of the water.

This entry was posted by on Tuesday, 27 March 2018 06:47 in blog Blog subscribe
Leave a reply
You are not allowed to leave a reply!