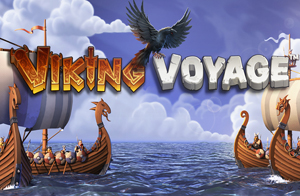 The online casino software group, Betsoft Gaming invites players to try out its new slot game, Viking Voyage. There is no guessing the theme of this action-packed title by this Malta-based content developer, which is set on the eve of an expedition into unchartered waters. You can head to BetsoftGaming powered casinos such as Box 24 Casino and 24VIP Casino and try out this new game today.

It is clear that Betsoft has given the Viking’s tale its own twist and the group’s excellent gift for graphics and animations stands out immediately. Look out for Viking fighters, including a lovely shield-maiden, alongside battle axes, golden goblets, horned helmets and more.

The base game of Viking Voyage is themed around the preparation for the grand voyage, against the backdrop of the Golden King eagerly setting sail to discover wealth across the oceans along with his warriors.

The Golden King is an important figure – not only on this maiden voyage but also on the reels of the game. When he appears on the first and fourth reel, he turns wild and stands in for all other symbols (except the scatter symbol) to form winning combinations. He has the ability to appear at fully-height stack level when he stands on the boat’s prow, and also uses his battle cry to freeze a reel in place while the rest respin. As his battle cries get louder, they can trigger even more respins for more rewards.

When two Longboat symbols appear on the first and the fifth reels, they trigger a free spins game. At this point, the warriors disembark from their boats and search for loot over 15 reward-filled free spins.

The marketing director of Betsoft said about the new game: “Viking Voyage offers players a deeper, more meaningful experience to other games with similar themes. From the artwork to the gameplay mechanics, every aspect of Viking Voyage is steeped in Scandinavian lore and supported by the standard of cinematic gameplay that is unique to the best games in Betsoft’s Slots3 series. Every symbol tells a story, and both the free spins and stacked wild respin features are tied closely to the narrative of the game. We are confident that Viking fans and seasoned slots players will all find this voyage an exciting one to undertake.”

This entry was posted by on Friday, 10 May 2019 09:34 in blog Blog subscribe
Leave a reply
You are not allowed to leave a reply!