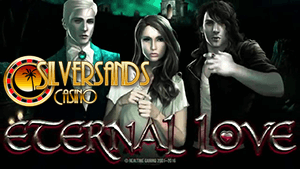 It’s been a really busy week for Silver Sands Casino and with a new game on the verge of being released and a myriad of bonuses available to be claimed by new and more experienced players, there is simply no reason you should miss out on what could be a very profitable round of bonus claiming and game playing.

Silver Sands, on its Facebook page, posted a number of bonus codes this week and we’ve gathered them all up and listed them all here to make your weekend of playing at your favourite South African online casino just a little bit easier.

First, let’s discuss the new game on the verge of being released. According to Silver Sands’ Facebook page, Eternal Love is a new video slot that RTG, its developer, classifies as an ‘all ways pay’ game. That means you won’t need to worry about making matches that go just from left to right. The game is about to be released in perfect time for Valentine’s Day but if you’re not married or part of a couple, don’t fret. This game takes a slightly darker twist on love and features a number of vampires who want to make their victims live forever. Set to be one of the top games of the year, this is an online video slot you simply shouldn’t miss.

Now, let’s talk bonuses! The bonus set for Aladdin’s Wishes started just a few days ago and players who get their bucks in before the end of January 2016 will be able to claim a few impressive casino bonuses. There’s a 30% deposit bonus on all deposits between R100 and R499.99 which will get you an additional 30 free spins. For those players who want to spend a little more, there’s a 40% bonus on deposits between R500 and R999.99 with a 50 free spin bonus thrown in. Finally, for those high rollers among us, spend over R1 000 and you’ll get a cool 50% bonus as well as 100 free spins just to keep things interesting. This bonus can be claimed with the coupon code ALADDIN16 and you can claim up to five times up to the end of the month.

This entry was posted by on Thursday, 28 January 2016 00:00 in blog Blog subscribe
Leave a reply
You are not allowed to leave a reply!